New Gods Special is a comic which includes three stories, each with their own creative team released by DC Comics because of Jack Kirby’s 100th Birthday.  This book retails for $4.99 and has 48 pages in total.  I haven’t read to much of Jack Kirby besides a few Kamandi books, so I wanted to give most of these specials a try as they are all one shots.

Orion of New Genesis is the first and main story written and penciled by Shane Davis, ink by Michelle Delecki, colors by Alex Sinclair, letters by Dave & Troy from a Larger World.  The story itself is about Orion, the peace keeper of two worlds at war and son of Darksied, and having to defend the foragers vs his brother Kalibak. 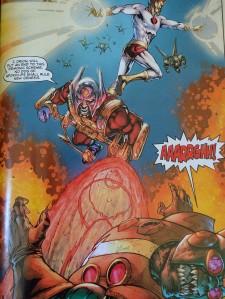 It’s written in a very space sci-fi manner and is visually stunning.  I have not seen art by Davis before, but this really makes me want to get into some of his other works.  The end of the story finishes with a dedication to Jack Kirby himself. 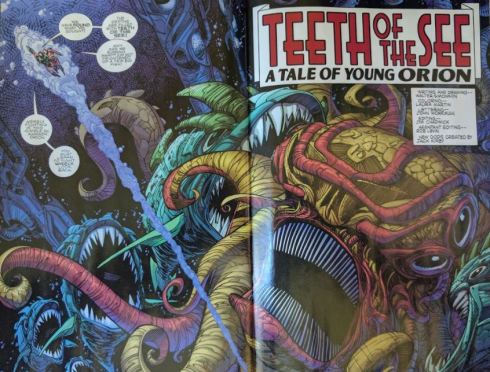 A Teeth of the See A Tale of Young Orion is the second story in this book, and is written drawn by Walter Simonson.  This is another six page story telling you more about Orion. Visually this one has some pretty sweet images (see above) but some of the detail work is a little lacking. 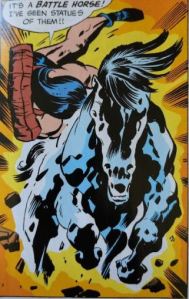 The Young Gods of Supertown is the final story in the book and is written and drawn by Jack Kirby and Inked by Colletta.  I think the coolest part about these one shots is that everyone will have a piece written by Jack Kirby himself.  This is another 6 page short introducing Lonar as a character.

2.5/5 – Space Sci Fi for the most part isn’t my jam, but the main story is pretty well written.  While I’ll probably still get the rest of these one shots, I wouldn’t recommend them unless you like the author/artist or are a big fan of Space Sci Fi comics.  The biggest thing this book made me want to do is check out BUG!: The Adventure of Forager.

One thought on “New Gods Special”