The second book from the September Comic Bento Box was Agent of S.H.I.E.L.D Vol 1 The Coulson Protocols published by Marvel, written by Marc Guggenheim, art by German Peralta, color by Rachelle Rosenberg, and letters by VC‘s Joe Carramagna.  Another TV show I have yet to watch, but have been considering it with the addition of Ghost Rider.  In my predictions thread  I did pick an Agents of S.H.I.E.L.D. book, however it was a Ghost Rider based one.

As I mentioned in my September Comic Bento Box post, the only Agents of S.H.I.E.L.D. I’ve read were there issues from the Standoff story line.  Ironically, this book is part of that.  The cool thing was that while I read one issue(I think), this book went somewhere completely different than Standoff.  While they note it happening, it has nothing to do with the main story line, and actually adds something to Standoff that you don’t really see.  They also include a bunch of other heroes in this book, adding for more than just the Agents.  The story is mostly about Agent Coulson and how he comes up with a plan on dealing with all the heroes in case they decide to turn sides.   When the information gets into the wrong hands, the Agent’s will try to recover the information.  This books also has a nice little twist at the end to get readers to want to get the next book. 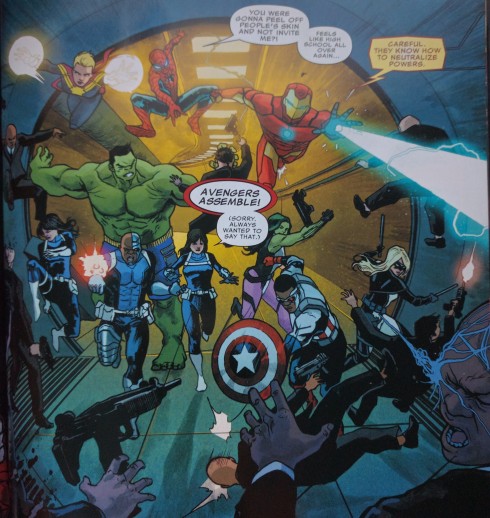 Visually this book is nothing beyond the standard cookie cutter marvel art, but that isn’t really a bad thing.

3/5 – If you are a fan of Marvel,  Agents of S.H.I.E.L.D. or read Standoff I think this would be an enjoyable book for you.  While it’s not anything that really stands out, it’s still a worthwhile read.