Skip to content
Posted on September 29, 2016 by TheColeSpot Posted in Uncategorized

The final book from my August Comic Bento was Sam & Fuzzy Fix You Problem.  This book is done by Sam Logan and published by Blind Ferret Entertainment, Inc.   After listening to the We Be Geek’s podcast,  Moss from Comic Bento had mentioned that this was his publishing company and they re-published Sam & Fuzzy  for the box, because he was a big fan. 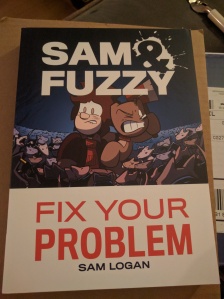 When I opened the box, and looked through I put this one as the last book to read as I assumed it would be the one I liked the least; thought it only matched the animal theme at .5 because a teddy bear isn’t really an animal.  Well I was wrong on both accounts.  First, this book was great.  It’s written in comic strip form and tells us about the back story of Fuzzy, and also where he is currently with the Ninja Mafia Services.  Second, they have plenty of animals including gerbils, a cat side kick and a werewolf, just to name a few.

The books is broken up in two parts, from when Fuzzy first “came to remember” and 10 years later.  When he first comes to light of remembering, he is working with a thief named Hazel who has a side kick black cat.  During his time with Hazel he works jobs, and gains a great friendship.  10 years later is filled with Sam, Aaron, Fuzzy and Dev, his co-workers in NMS or the Ninja Mafia Services.  While the title would make Sam and Fuzzy seem the main character it’s more-so focused on Dev; a girl who’s looking for a job and finds herself working for NMS, a failing ninja syndicate who no longer kills and only works on helping people with weird problems.  The writing is very lighthearted, without being too childish, and will make you want to keep reading until you finish. 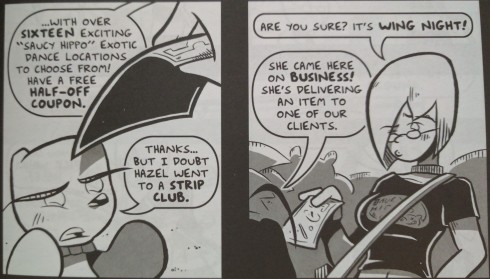 Visually this is nothing ground breaking, it really works perfectly for the story.  As mentioned before it’s in a comic strip style, and black and white but has good shading when needed.

As always if you haven’t already, please like The Cole Spot on Facebook, you will be able to see what I am reading, help pick what I review, and also have chance to win free swag!