I recently ordered the Comic Bento Boxes to add to my collection, but also give me some new comics I may not normal read.  My first box was the August Comic Bento  which had Animal Planet as the theme.  While putting this together I really thought a fun idea would be to guess on what the next box will hold.  For those who don’t know the current theme for September is As Seen on TV.

Comic Bento release a Mega Bento Box which gives one lucky subscriber 4-5 extra books every month.   These extra books are always shown off as they are not part of the normal box, and normally let us know these titles are not going to be in the normal Comic Bento. The Mega Bento for September includes Supergirl, Samurai Jack, Howard the Duck, Buffy, and Transformers.  As mentioned before these are not part of the normal box, so while guessing I am going to take all of these off the table.

Below are my guesses for what will be in the September As Seen on TV Box.

While listening to the WeBeGeek Podcast, Moss from Comic Bento revealed that one of the books would be from Oni Press and he couldn’t believe that they would let him use this book.  When I checked out Oni Press it seems like two of the main books which would fit the description of “As Seen on TV” are Invader Zim and Rick and Morty.  My Guess is Rick and Morty as they just released the Oni Press Exclusive on TBP #3.

While looking into Homecoming from the August box, I was looking into Aspen Comics.  I noticed that the last two boxes had a book from this, and while scrolling down the comic list I found this description “Action / Adventure / Reality Show.”  I thought to myself, well this loosely fits the “As Seen on TV” theme for the September Box.  While I hope this guess is wrong, I am putting my second guess is Idolized.   While I did enjoy Homecoming from the last box, these both seem to only sort of fit the actual theme.

For the third book, I would think one superhero TV show from Marvel or DC has to be in the box . One of the latest Comic Bento video post is adding Flashpoint to the box for 10 lucky people, which takes Flash off the table too. For those who haven’t subscribed it’s for anyone who shares, likes and tags a friend, so you should jump on that.  That being said Supergirl and Flash are out of the box.  Because this is such a big range of stuff with all the current and previous shows, I’m going to add in a wish lists along side the guesses for this.

While I broke it up into the two Marvel and DC, I assume they will only bring one book into the actual box.   That being said I’m making a guess on both of them even though only one will be in the box.

This is the safe pick, but with Supergirl and Flash in the mega and give away, might as well add the other superhero show on the CW and go with Green Arrow, based on the show Arrow. The book I would pick for this is Green Arrow: Year One.

I went safe for DC, but I’m going to go a little more loose on my Marvel guess.  While he’s not on TV yet, my marvel pick is Robbie Reyes Ghost Rider based on Agents of S.H.I.E.L.D.  The book I picked is All-New Ghost Rider Vol 1.

For the final book, I am going with the odd ball stuff that has comic books but not the traditional super hero.  My first thoughts when coming up with this idea was Preacher and The Walking Dead, but I figured those two may be a little to big and also are doing pretty decent on there own. 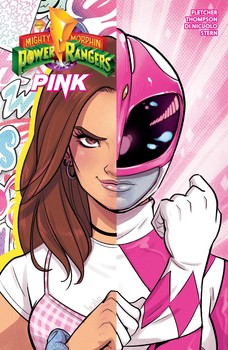 As a reminder, I have no tie ins with Comic Bento and everything I picked was only a guess on the theme itself.  If you plan on joining Comic Bento you can use this link, and it will give me a $5 credit.  If my picks were to come correct I think I would give the box a 4/5, as I think Idolized would be the weak link.

If you have any thoughts or ideas of stuff you would like to pick please let me know on a comment, e-mail, or from any of my social media outlets.

TL:DR :  My guesses for the September Comic Bento with the Theme of “As Seen on TV” are Ricky and Morty, Idolized Vol 1, Green Arrow: Year one or All-New Ghost Rider Vol 1 and Mighty Morphin Power Rangers: Pink.  Which if was given to me I would rate a 4/5

2 thoughts on ““As Seen on TV” Comic Bento Predictions”