Jurassic Strike Force 5 is written by Joe Brusha, Art by Julian Aguliera (Chapter 1), JL Giles-Rivera (Chapters 2-5) and Ryan Howe / Armando Rillo (Chapter 6), Colors by Thomas Mason (Chapter 1) and Jeff Blake (Chapter 2-6), and Letters by Artmonkeys (Chapter 1) and Jim Campbell (Chapter 2-6).  JSF5 was published by Silver Dragon Books, who specializes in all ages comic book ranging from Princesses to Zombies vs Aliens.  This book was one of the four received from the August Comic Bento Box, which had the Animal Planet Theme. 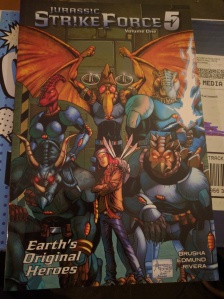 The story starts off with a demon who comes to earth with his task force of evil dinosaurs.  Once Chapter 2 stars we are introduced to Tyler, our main character, who is a young boy who is stationed at a research center with his father.  Tyler finds a flying robot bug, which becomes his friend because he says the word “Friends” a lot.  The bug leads Tyler to the JSF5 team and brings them out of there hibernation, just in time to meet up with the evil dinosaurs who are all almost the same bread as the JSF5.  As for the story this book is filled with failed jokes, and pretty predictable story lines.  The most memorable being Tyler sees a mech suit and asks to use it, when they say no, he says something along the lines of “I am going to be saving you guys in it soon”, and about 10 pages later guess who shows up in a mech suit to save the team?  For adults this isn’t going to be a great read, however Silver Dragon Books seems to make stuff for children, so the failed jokes and predictable story line may not be as predictable and the jokes not as failed. 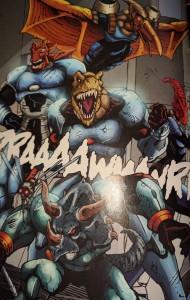 Visually this book isn’t really anything to set it apart.  Nothing about the Art really stands out besides the covers, and for the most part it’s pretty lack luster.

2/5 – This book is pretty predictable, but also doesn’t have anything really setting it apart for everything else.   May be a good start book for children, as the content is pretty PG.